Some daffodils I bought last summer were full of fruit flies – I didn’t notice the pesky critters until I set the flowers out.

Hundreds of pesky little gnats were all over my kitchen – biting me and sitting on the edge of my coffee cup.

Once the critters  perched on the rim of my coffee cup,  I yelled, “THIS  IS WAR!” 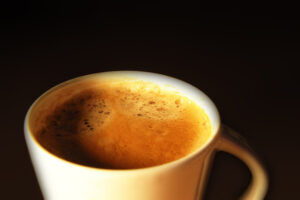 After researching how to get rid of gnats, I placed a cup full of soapy water and vinegar on the kitchen counter before I went to bed.

The next morning about 30-40 dead fruit flies were in the cup and several still humming around the perimeter.

I said, “Don’t those stupid flies see all of their dead relatives in the cup and they’re still droning around the edge?”

That’s when I thought, “Some Christians are like fruit flies, they hang too close to the brink of sin and fall in, just like the little insects. They hang on the periphery of sin and then many of them totally fall into sin, as the gnats –  and DIE – spiritually and many times physical death.” 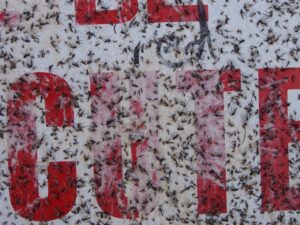 The church goers tell themselves they’re strong enough in their salvation to be around people that lie, gossip, drink too much, use drugs, gamble, stir up trouble, commit fornication and adultery, dabble in pornography, homosexuality,  lesbianism, and on and on.

They are hanging too close to the border of sin – just like the fruit flies – flirting with danger.

My mother used to say, “If you play with fire, you will get burned.”

I will rephrase and say, “If you play with the devil, you will get hurt.”

“You’re cheating on God. If all you want is your own way, flirting with the world every chance you get, you end up enemies of God and his way.”  James 4:4 (MSG)